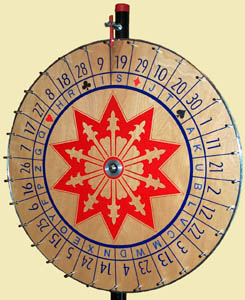 Every day the newspapers bring us word of some marvelous new scientific advance - the fruits of our glittering age of reason. Our world is a fast-moving kaleidoscope of marvelous inventions: the steam locomotive, the telegraph, the disposible celluoid collar. Yet this progress comes at a price! Our lives have grown faster and more complex. Do you have difficulty remembering numbers, even a simple train schedule? Dr. Wilson's Memory Elixir can help!

In order to demonstrate the benefits of Dr. Wilson's Memory Elixir - a wholesome blend of natural extracts of thirty different herbs and root vegetables that promotes and revitalizes the capacity for learning and memory, strengthens the nerves, and effectively wards off cataleptic neuroplexy - Dr. Wilson has memorized the first 5,200 digits of pi!

A circle is the set of points equidistant from a point O, called the center. The distance r from the center is called the radius. Twice the radius is known as the diameter. The distance around a circle is the perimeter C, called the circumference. The ratio of the circumference to the diameter (C/2r) is an irrational number called pi. In recent years, pi has been computed to over one trillion decimal places. For a more complete explanation, see Eric Weisstein's World of Mathematics.

Pi has provided many interesting challenges to mathematicians and computer scientists over the years. The value of pi is the surprisingly complex answer to the simple question: How much bigger is the circumference of a circle than the diameter? To the mnemonist, pi provides the ultimate test of memory, a Mount Everest with its summit in infinity.

Most of these schemes have the disadvantage that the digits of pi are memorized serially, that is, the memorizer must begin at the beginning and rattle off digits in a stream. Dr. Wilson has memorized pi with added positional information, so that it is possible for him to recite a ten-digit block from any position. In performance, the members of the audience are given a table containing pi. Each row of the table is headed with a letter or double letter (A-Z, then AA-ZZ), while each column is headed with a number from 1 to 10. Each cell of the table has a ten-digit block; for example, cell A1 is the familiar 3.141592653. Dr. Wilson asks a volunteer from the audience to select a letter and number using a Wheel of Fortune, then recites the digits in that block.

You can see Dr. Wilson's entire Pi Table. You can see the first ten thousand digits of pi at The Joy of Pi, or download pi to one million digits at Project Gutenberg.

Don't miss the story of Pi Day in the archives!